I took a long break.  I needed it. Trust me.

I thought I was going insane. Too many things on the go, places to go, people to see, impress or keep happy.

Over the last 6 months, I started a new medication to help combat the depression that kept creeping into the corners of my life. While the fog started to lift from my brain, it settled firmly around my hips.
Over 4 months I gained 30 lbs.  30 POUNDS people. I spent the last 2 months working freakishly hard to try and get rid of the weight – nothing helped – problem was that I had ZERO energy to put into any sort of exercise regimen. Spent all day being exhausted, and all night staring at the ceiling. How do you combat that?  Caffeine to wake up during the day, sleeping pills to help me get to sleep at night.

Today, I start my ISAgenix journey.  My friend, Tash, inspired me by talking about her personal success. 10 lbs and 12.25 inches released in 10 days?  More energy?  Sleeping better? Less anxiety?  Where do I sign!?
While I hope to document this amazing journey that I am going to take, I’m also hoping that I can inspire others to take charge of their life too and take that step to better health.  I’m looking forward to having the energy to play with my kids again. Run with the dog.  Feel confident in a swimsuit.
If you want to learn more about the system and how you can change your life, contact me!

Day 1 – here I am – staring down what seems like a long road. I’m inspired by the fact that the average weight loss over the month is 25 lbs. I have a bridesmaid’s dress that I have to wear in October. I’m terrified to go for my fitting. I’ve taken my before pictures, (which I will absolutely NOT be posting until after I’ve finished) done my measurements, and weighed myself. 195 lbs. yikes.

I started my day with Ionix Supreme in a glass of water. It wasn’t bad – I think I’ll try it as a tea tomorrow.
I made my shake at home to take with me – Creamy Vanilla with 8oz of water and 1/2 a frozen banana blended.  This was pretty tasty!
My snack consisted of some cherry tomatoes and my Natural Accelerator supplement.
Lunch was a Dutch Chocolate shake with the other half of the frozen banana blended in. OMG this was delicious.
For my afternoon snack, I’ve had 2 Isagenix Snacks and a Natural Accelerator.
Dinner is going to consist of Sushi/Sashimi with my friend and coach, Natasha.

Tonight I am attending an information night to help me learn more about the amazing products that Isagenix offers, and how to build my business and inspire others to make a change for the better.

I’m excited about this new road.

Seriously… this dog has brought a whole new level of pain in the a$$ to my world… moreso than my children, because at last with my kids, I can explain to them what they’ve done and why it’s bad.

sorry I doodied on the carpet - wanna pet me?

Hooking up this week (for the first time) with the photo challenge!!

Week #2 of having Mr Sammy. He’s a completely different dog than he was when he came to live with us. While he’s still timid and cautious, but I’m learning things about him and his personality that are making it a bit easier to bring him out of his shell.

For instance, I learned yesterday that if you have a dog with you, he will let you pet him. I figure that in his eyes, if you have a dog, you’re ok… it means you’re trustworthy or something.

I’ve learned that using a clicker to reinforce the good things in his new world helps to keep his mind off all the “bad” things that were scaring him. (Thanks Anna!)

I walk the same area every day, just so that he had a bit of consistency, and today was the first day that we did our entire walk without him tucking his tail once.

This is huge considering that I very rarely saw his tail during our walks.

I’m truly enjoying the challenge that is figuring out this newest boy in my life. I think he’s going to be great.

I remember when Peanut was born.

I had no idea what I was doing. Even though I had friends with children, it felt totally foreign to me. This little person that I couldn’t hand back when they wouldn’t stop crying. This tiny life that depended on me for everything.
I would question myself constantly :

Is the water too hot?
Is he wearing enough?
Should I be worried about that cough?

Am I doing anything right?

I wish this had been around 7 years ago:

The little smile from the crib at the end?
It melts my heart… just like Peanut’s little smiles used to (and still do)

For all you moms out there… You’re doing ok.

Sammy came to be with us on Sunday, February 26, 2012.
He is a two and a half year old registered Vizsla that decided he wanted nothing to do with being a bird dog… he just wanted to love someone.

And he found me.

I went 2 Sundays ago to meet him. I had this delusion in my head that they were going to let him out of his crate, the music would start and he would run straight to me, knocking me over and licking my face, all while wagging his tail ferociously.

He wanted nothing to do with me. He ran everywhere but towards me, pulled away whenever I attempted to pet him, and generally had his tail tucked between his legs.

But he was beautiful. Sleek and agile, he was obviously in good health. He showed tremendous affection for the handler that had been working with him for the past while – and I had a feeling that if given the correct circumstances, I could develop that same bond with him… after all, they’re not called “Velcro Dogs” for no reason right?

Hubby and I had been back and forth between adult “started” dog, or puppy.
I wanted a puppy because I wanted to know it’s history, be responsible for it’s socialization, plus puppies, by nature, are much more instantly accepting of children than adult dogs.
I wanted a started dog because, if you find the right dog, you can skip housetraining, crate training, and socialization altogether! What more could you ask for!?

I have to be honest; I was nervous when I first thought about bringing Sammy – “Soul Man” was his name at the time – into our home. I didn’t want to have a dog around that was nervous of children, given that there will be a minimum of 3 around at any given time. I’ve heard nightmare stories of people adopting pets that they absolutely fall in love with, but they never warm up to their children, and as a result, they have to return them to the shelter/breeder/wherever they got them from. I didn’t want that sort of heartbreak.

I spent 2 hours with him that day. Monster came with me (so I could see his reaction to a little person) and by the end of our visit, he was letting Monster pet him, and was allowing me to walk with him. Given the fact that he is not leash trained formally, this was a huge step. They showed me how wonderfully crate trained he was – every time we walked by it, he would go in and sit down.

I decided that while he would definitely be more work than I was looking for, he would be happy with us. Plus, puppies always sell… an adult dog isn’t usually something that people go looking for.

I’m going to try to chronicle my journey as I attempt to train this newest boy in my house.
What was I thinking? I should have gotten a female. I’m completely outnumbered here.

We’ve already had some major breakthroughs. It’s only been 7 days and already Sam is walking calmly on a leash – not choking himself at the end of it anymore – and sitting on command, which he didn’t know at all when he came to us.

Look Mom! I can sit!

He’s an absolute treasure, and he’s warming up to everyone very well… but he’s still a Mama’s boy… which is just fine with me 🙂 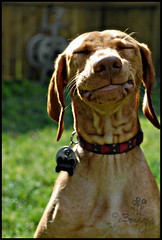 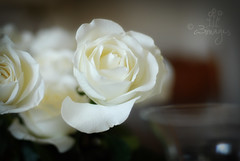 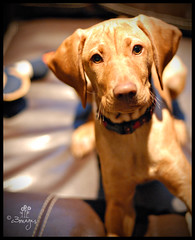 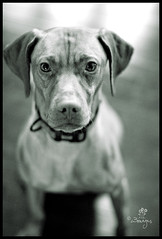